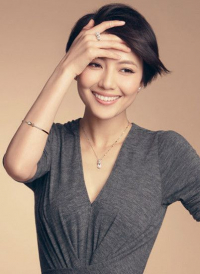 My name is Gyuri and I have a way of bringing sheer joy into the lives of all the gentlemen I meet. Take a look at some of my photos and you will see quite clearly for yourself why men fall in love with me on our first date. However, there is so much more to me than good looks because I have a beautiful personality too. Let me tell you about a date I had recently with a very pompous middle-aged man who thought rather too much of himself and believed that women should be in awe of him; at least, that is, until he met me.

We had a splendid lunch at The Ivy in Chelsea, during which he talked incessantly about himself in exaggeratedly glowing terms. I just smiled and nodded in agreement once in a while; after all, he was paying handsomely for my company. By the time we were having coffee, he ran out of things to say about himself, thank goodness, and actually began to show interest in me. I have a way of looking at a man which makes him feel like he is almost falling in love with me, and although this man was harder to get through to than most, he started to look back at me in a way that told me I had got the result I was looking for.

The thing is, and you an probably tell if you have looked at my photos, that I am one of those women that are all things to all men, and I have a personality which is at the same time endearing as it is seductive. Anyway, by the time we got back to his mews house in Belgravia, he was eating out of my hand, and rather than just taking me straight upstairs to bed, he offered me a glass of wine and we sat down on the sofa together. He looked into my eyes and came right out with something I had heard many times before; he said he would like me to be his mistress and that he would set me up with a generous allowance if I would stop working as an escort. I never say no, of course, but I told him I would have to think about it; this made him even more keen, then it always does.

After a while, he asked me to come upstairs. I hesitated for a moment, then said if he thought I was so special maybe he would like to give me an extra present. Without hesitation, He took out his wallet and handed me all the contents, then I took his hand and led him upstairs. The joy of watching me undress almost made him burst even before he had undressed, and it was a simple matter of taking him in my mouth to bring him to complete satisfaction. Of course, I stayed for an encore, and I am so good at what I do that I made sure he would want to see me again soon and regularly. I wonder if you would like to see me sometime…

Ni Na
My name is Ni Na and I am one of those exceptional young women who turn heads everywhere they go. read more

Sheer Joy
My name is Gyuri and I have a way of bringing sheer joy into the lives of all the gentlemen I meet. read more

Fabulous Chinese Escorts in London
Ever since the two-year China visa was introduced, there has been an influx of high-class Chinese escorts into London, read more